The Medici Villa of Castello

The Medici Villa of Castello

The Medici Villa of Castello became part of the assets owned by the Medici family in 1477, when Giovanni and Lorenzo di Pierfrancesco de’ Medici, cousins of Lorenzo the Magnificent, bought it from the Della Stufa family.

It was in this Villa that Marsilio Ficino educated the young Lorenzo di Pierfrancesco to the vision of a Humanist world, and it was for this villa that Botticelli painted The Birth of Venus and Spring, later transferred to the Uffizi.

Like most of the villas in the Florentine countryside, the Villa di Castello presents a secular stratification, the outcome of a series of interventions of renewal and addition that took place starting from the oldest nucleus, which was a defensive tower from the 12th century. Situated along the directrix of an ancient Roman aqueduct that supplied the city of Florence with water from the Marina valley, in the 14th century, the villa was nicknamed “Il Vivaio” (“The Nursery”) because of the large basins located near the current entrance plaza.
The renovations and extensions carried out by the Medici dating from 1477, aimed to incorporate annexes to the west of the ancient medieval house in the Villa (on the right-hand side when looking at the main façade). This fact explains the misalignment of the garden and the Villa, which lie along two different axes of symmetry. In the 16th century, under the authority of Cosimo I, some impressive works of transformation were undertaken that were completed under Ferdinando I at the beginning of the 17th century. As a result of these interventions, the ancient 15th century house was more than doubled in size, reaching a ground plan not too dissimilar to the current one.

Many architects and artists worked on the Villa in this period, but those who left the deepest trace of their work were unquestionably Niccolò Pericoli, dubbed “Il Tribolo”, Giorgio Vasari, and Bernardo Buontalenti. Providing a homogeneous aspect to the renovated complex and blending the different extensions into a coherent design was certainly a far from easy undertaking, above all because the interventions had to cope with the many constraints imposed by the pre-existing structures and the context. The drawings that have come down to us show the architects using all the tricks up their sleeve to conceal the lack of symmetry and the misalignments. The perception of order of symmetry and regularity as intrinsic architectural values was so deep that certain views of the Villa (for example those of Utens and Zocchi, even if made 150 years apart) set themselves the task of regularizing the appearance, thereby subordinating reality to ideality.
At the dawn of the 17th century, the Villa had become the focal point of the elaborate system to organize the territory, which allowed the Medici to control the natural elements, direct the economiclife, and govern the State. After many vicissitudes, the complex was acquired in 1919 by the Italian State. Today the Villa is the seat of the prestigious Accademia della Crusca. Many of its rooms are of special merit, and among these is the Sala della Pale, where the personal coats of arms of the Academy’s 15th- 18th century members are displayed.

The Garden of the Villa of Castello can rightfully claim to be a prototype of the 16th-century Italian garden. It was created as a significant part of an overall programme to renovate and embellish the Villa of Castello, inherited from the mother Maria Salviati, grand- daughter of Lorenzo the Magnificent.
The general project was entrusted to Niccolò Pericoli, known as “Il Tribolo”, who was also responsible for constructing the imposing hydraulic system that conducted water from the Castellina spring above, to feed the numerous fountains. As for the inventor of the garden’s elaborate iconographic scheme, which was intended to exalt the illuminated dominion over Tuscany of the new Medici government as well as their peacekeeping role, some scholars now opt for Benedetto Varchi, others for Luca Martini or Niccolò Martelli. The key points of the rich and elaborate decorative project created by Tribolo, together with Pierino da Vinci and other artists, are – along the central axis of the Italian garden behind the villa – the fountain of Hercules and Antaeus, (a work, now a copy, made by Tribolo and Pierino da Vinci and crowned by a bronze group by Bartolomeo Ammannati; the original can be admired in a room of the nearby Villa La Petraia, which also keeps Giambologna’s Venus/Florence, which at one time was positioned to complete the so- called Fountain of the Labyrinth again from the Castello villa, but transferred to Petraia at the time of the Lorraine) and the extraordinary Grotto of the Animals or the Flood.
Among the most famous in Europe, designed by Tribolo himself and originally enlivened by spectacular water features, this is a perfect simulation of a natural cave that gathers sculptural groups of animals in polychrome marble, and plays a key symbolic role in the complex allegory created in this garden for Cosimo and his successors. In the “wilderness” of Holm- oaks, oaks, and cypresses that develops in the upper area – transformed into an English-style park in the first half of the 19th century – stands the great basin created by Vasari and decorated by the Apennine or January, a bronze sculpture by Ammannati. The garden boasts an exceptional collection of citrus fruits, consisting of about five hundred plants of historical-botanical importance, unique in the world and descendants of the ancient Medicean varieties with specimens from a period stretching over three hundred years. The plants are meticulously cared for using ancient cultivation techniques, are on show in the open from April to October, and are stored in the historical lemon houses in the winter period. There is also a garden of medicinal herbs which is a real jewel with the Stufa dei Mugherini, a greenhouse that preserves the rare Indian jasmine from Goa called “mugherino” in Italian, which gives the name to the greenhouse of the so- called “Ortaccio” or secret garden.

After the Medici family passed to the Lorraine family, who considerably modified the garden and equipped it with various pictorial decorations in the interior, the villa then passed to the Savoy family, who in turn donated it to the State in 1919.
Today the villa is the seat of the Accademia della Crusca and the Opera del Vocabolario Italiano. For this reason, the interior of the villa can only be visited by appointment on special occasions, while the garden can be visited freely.

Closed: Tuesday-Saturday, 2nd, 3rd and 4th Sunday of the month

Villa, headquarters of the Accademia della Crusca
The meetings take place, for groups (with reservations required), every:
• Wednesday from 9 to 18;
• Thursday from 9 to 16;

For individuals (with reservations required):
• every last Sunday of the month at 11. To take part, simply show up in front of the Academy headquarters (via di Castello 46, Florence) at 10.45. 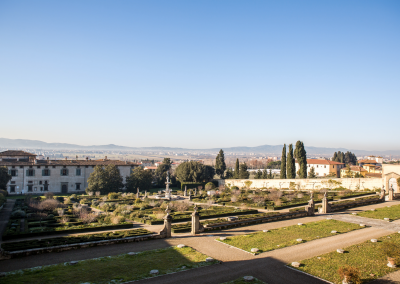 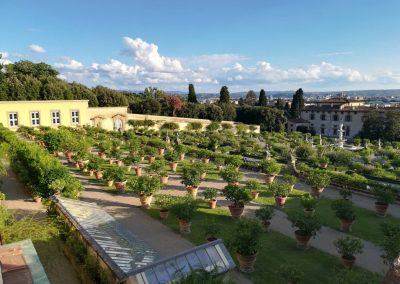 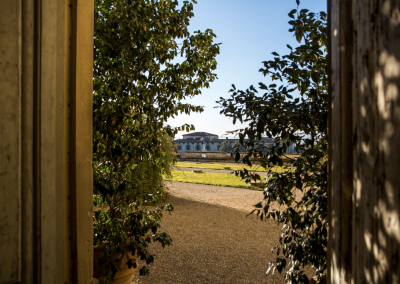 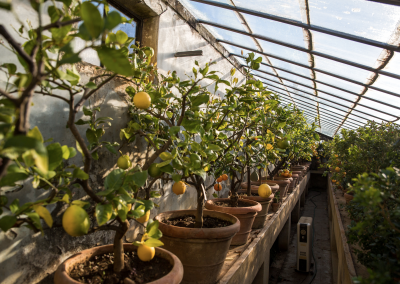 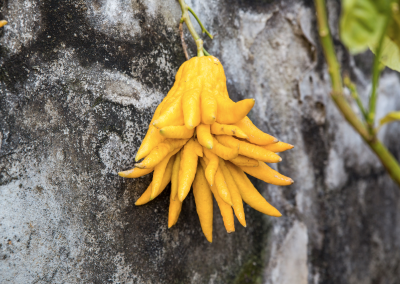 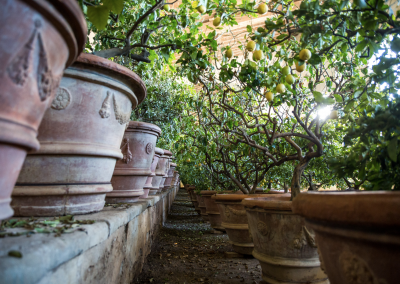 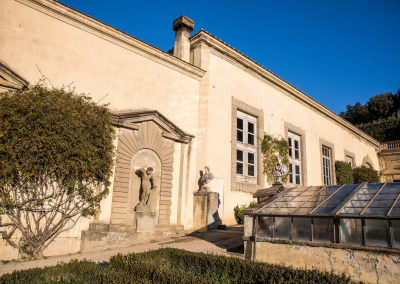 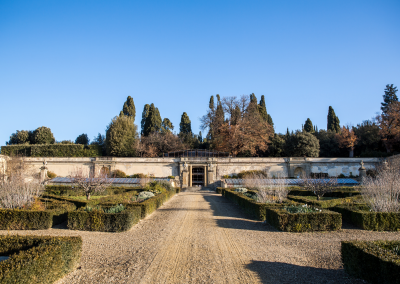 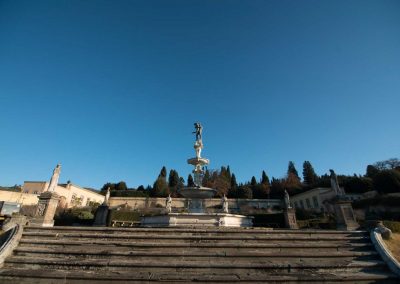 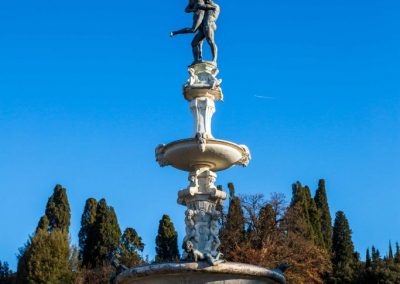 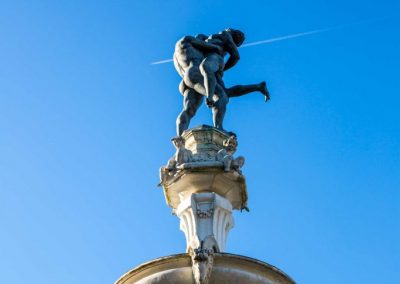 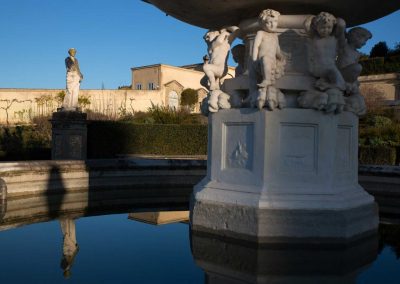 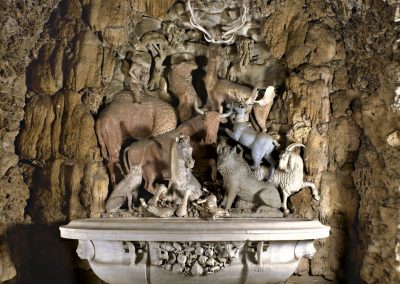 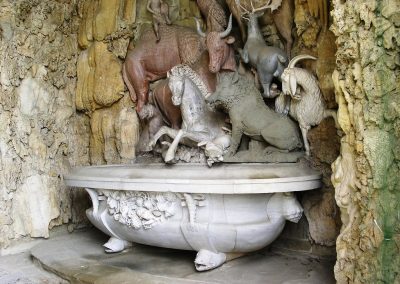 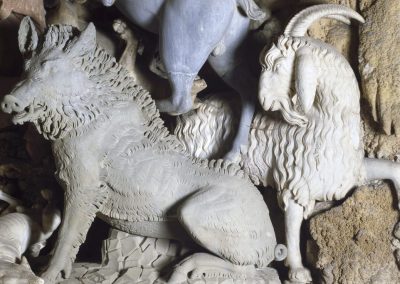 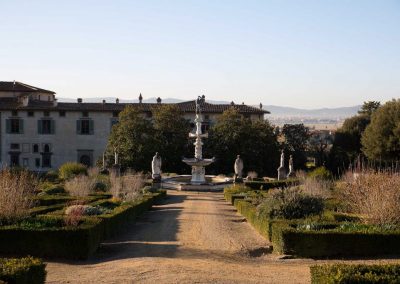 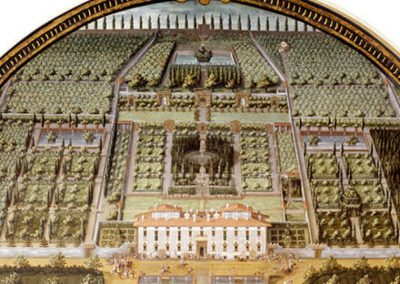 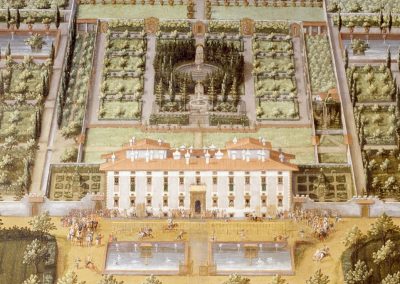