The Medici Villa of Careggi

The Medici Villa of Careggi

After the villas of Cafaggiolo and Trebbio in Mugello, that of Careggi was the third country residence to be built by the Medici and to be redeveloped by Michelozzo.

Situated on the hill of the same name, the residence has the predominant character of a rural villa-farm, whose closeness to the city allowed the Medici to take care of their public and personal business interests there. The building features four storeys, two above ground, one below ground plus a loft area, and is characterized by its slightly curved eastern front and a crenelated coping projecting over stone corbels which becomes a unifying element, and invokes the semblance of a fortress without actually being one. The oldest part, the one with the most compact ground plan, has a central courtyard with a loggia. On the ground floor we find the chapel, some reception rooms, and the main staircase leading to the rooms on the upper floor. The courtyard has a trapezoidal shape that follows the profile of the main building, which in turn was built following the path of the main road that skirted it.

The courtyard gives access to the ground- floor hall. This dates to the beginning of the 17th century, and is decorated and frescoed throughout. Of special interest are 16 lunettes with views of imaginary landscapes, seascapes, scenes with ruins, gardens, fountains, and so on. A staircase leads down to the basement, where we find a rare example of an architectural caprice, namely, a nymphaeum, commissioned by Cardinal Carlo de’ Medici in the 17th century, using a part of the villa’s wine cellars. On the first floor to the left of the main staircase opens the Salone del Camino, dominated by a fireplace, adorned with bas-reliefs, and dated 1465. Just beyond is Lorenzo the Magnificent’s study, located in the south-eastern corner of the Villa.
This is a small room with a barrel vault, whose walls and ceiling are decorated with frescoes of grotesque motifs. From the hall we reach a room that leads to the first-floor loggia, which some attribute to Giuliano da Sangallo. Others have dated it to the time of Pope Leo X, when the family secured enormous prestige, or to the period following the third expulsion of the Medici, after 1534, when Duke Alessandro had the villa restructured. The loggetta was mentioned by Giorgio Vasari because of the paintings by Pontormo, which had already deteriorated by that time, since they had been dry-frescoed in a space exposed to the open air. The current grotesques on the ceiling would seem to date to the period of Cardinal Carlo de’ Medici, whose coat of arms is in the centre. The villa hosted the Platonic Academy with Cosimo the Elder and Lorenzo the Magnificent, as represented in the picture hanging in the Salone del Camino.

The villa is complemented by both a formal garden, facing the southern façade, and a large landscaped park that surrounds it on all sides. The nineteenth-century appearance of the park was by wish of Francis Joseph, and even today it is still characterized by arboreal species with tall trees, and the presence of various exotic species.

Villa under restoration. Closed to visits. 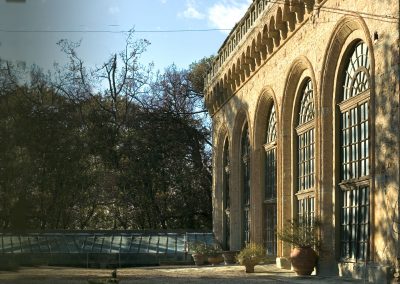 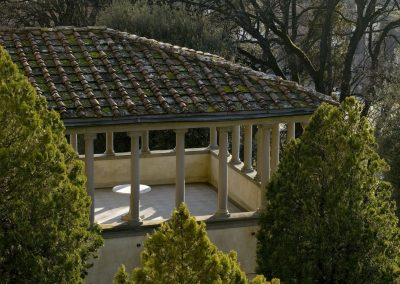 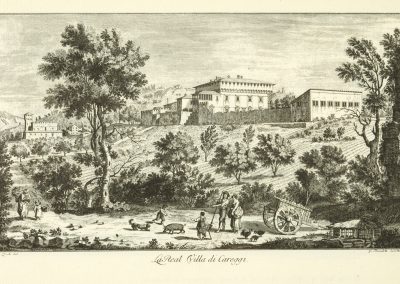