Medici Villas and Gardens in Tuscany

The serial site “Medici Villas and Gardens of Tuscany”, now part of the cultural and natural heritage categories of the UNESCO World Heritage List, consists of 14 villas and gardens of the Medici family located in Tuscany, a region that was the family’s homeland and the seat of the Signoria that bore their name.

The Medici were one of the most important families during the age of Humanism and the Renaissance, leading players in the history of Italy and Europe from the 15th to the 18th century.
The economic, political, and territorial power and influence of this family, enriched by an exceptional network of commercial and financial activities, traversed territorial boundaries from their original home in the Apennine area of Mugello, to spread throughout Tuscany, Italy, and the rest of Europe. Many personalities belonging to the Medici dynasty became prominent figures in modern history, among them Lorenzo the Magnificent, the popes Leo X and Clement VII, and the Queen of France, Catherine de’ Medici. As a result, for several generations, the Medici family dominated the cultural, spiritual, and scientific panoramas of their time: they were quite remarkable patrons of the arts; to them we owe the transformation of the territory in its passage from the middle ages to the modern age, in addition to fundamental contributions to the cultural revolution that would determine the birth of modern thought. The maximum expression of Medici power was fulfilled in the form of the “villa with garden”, a new kind of settlement, and the sign of an extremely innovative system to manage and organize the territory. The “villa with garden” marked the demise of the feudal occupation of the land and the fortified building type in favour of a conception of the territory as a pacified place where architecture was in a renewed dialectical and open relationship with the innate natural features and the surrounding landscape. This residential model and its progressive evolution constituted a prototype that would inspire future creations of suburban architecture both inside and outside the borders of Italy. The Medici family’s real estate and land were substantial, not only in Tuscany, but also in other regions of Italy and in France. However, with respect to these extensive assets, it was the Tuscan properties with their 36 villas and gardens that represented the most significant complexes from the point of view of the birth and development of this model of suburban residence. One result was that the Tuscan villas became a privileged place for artistic and scientific- engineering experimentation; an inexhaustible font of formal, compositional, and technological innovations. Of the 36 Medici properties examined, only 14, chosen for their representativeness, were entered on the World Heritage List for their acclaimed cultural, artistic and landscape significance determined by an authenticity and an exceptional functional, structural, and visual integrity.

The cycle of lunettes painted by the Flemish artist Giusto Utens between 1599 and 1603 and commissioned by “His Serene Highness” Ferdinando I de’ Medici to decorate the main hall of the Villa of Artimino, nicknamed “La Ferdinanda”, was intended to exalt the magnificence of the Grand- ducal crown.
Of the seventeen views that were originally made, only fourteen have survived to show us the main properties of the dynastic legacy, strongholds of the sovereignty of Medici power in Tuscany.
The individual Grand-ducal properties are represented in bird’s-eye views, immortalized in a rather ‘summary’ and homogeneous form.
Drawing inspiration from the ancient pictorial tradition of landscape painting and from cartography, the artist portrays the manor at the centre of every lunette – the actual villa often described as a “palace”, surrounded by its appurtenances: storerooms, flower gardens, ploughed fields, crops, and fountains.
Through this exceptional figurative document, today it is possible to grasp the innovative system of managing and organizing the territory in its most flexible and consistent form, a veritable microcosm around which the life of the Florentine Court revolved, well-established by the 16th century, that was to become a reference model for other royal residences in Italy and abroad over the centuries to come. 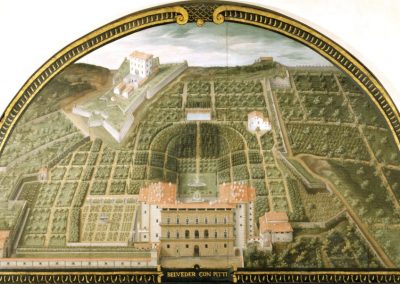 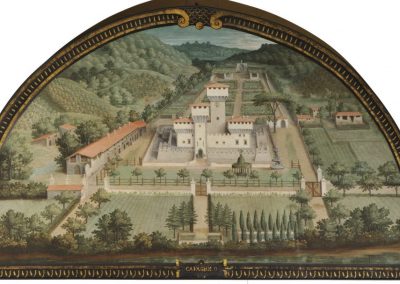 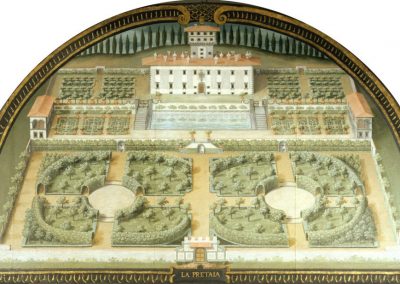 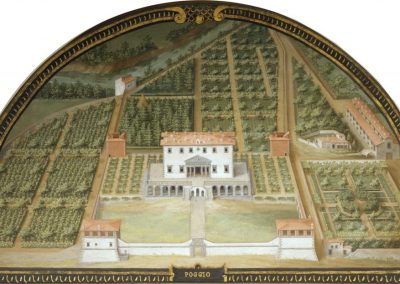 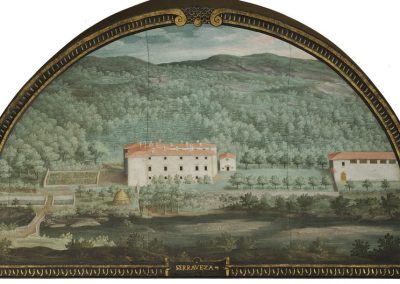 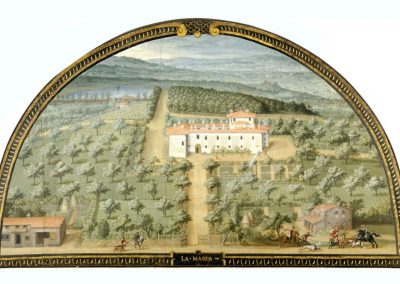 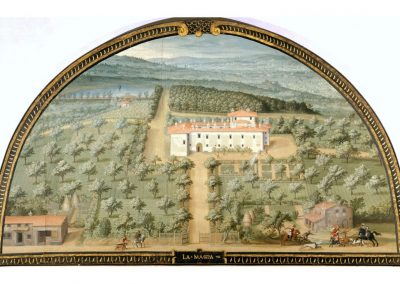 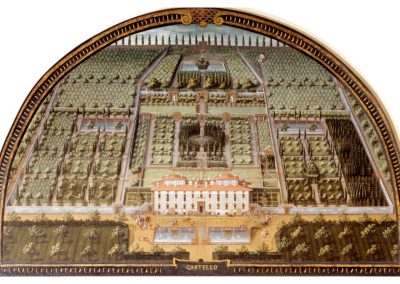 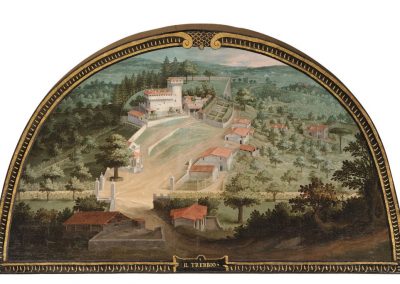